Needs validation was performed to confirm the requirements that North Quad residents have for a system intended to help users meet one another. The potential of the design under consideration to address those needs was also tested. Specifically, the test was composed to better understand the impact of the following characteristics:

The social needs of residents in North Quad, identified through earlier research, varied significantly from user to user. Those needs establish the basis for this study. They include:

Residents also described requirements they would have for any solution that helped to meet these needs. Requirements included:

Each potential user was shown seven storyboards in various groupings and asked to compare and contrast the way in which the system was depicted.
The storyboards differed along the dimensions previously described:

Test participants were asked the following questions after viewing the storyboards: 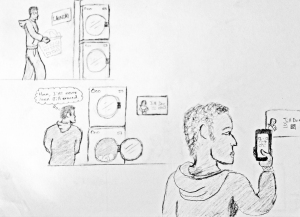 Recruitment Criteria: All North Quad residents were considered as potential test subjects.
Recruitment Methods: A “hallway ambush” was used. Potential participants were approached while entering the North Quad dorms.
Participants Recruited: Four individuals were recruited. All four were male, ranging in age from 19 to 21.

1.) No Perfect Context: Trade-offs Must Be Made

Locations like the laundry room, which are relatively private public spaces and in which users spend larger chunks of time also tend to be less frequently visited. Users also tend to be more preoccupied in such locations. Locations like the elevator lobby offer many more visits per day and no obvious preoccupations. But visits are extremely short and the very public nature of the location can inhibit behavior.

All users initially said that they would rather interact with the system via touch screen in order to avoid having to take their phones out of their pockets. However, those who reflected further on the issue identified prolonged interaction with another person’s profile as potentially socially awkward. Further, they recognized that it could be difficult to complete the interaction at the screen before the elevator arrived, and that they would abandon it if necessary.

Users’ pre-existing interests and social priorities impacted their feelings about the different types of interactions that may be possible through the system. While some found the playfulness of the social games to be a fun way to meet new people with similar interests, others couldn’t imagine using the system to meet anyone other than potential study partners. Further, user interests influenced whether or not different types of visual content was attention getting or encouraged interaction.